I am NOT a Grammar Nazi, but it does set my teeth on edge when people…

I see something in many Christian writings that I don’t like either. It’s not a grammar issue, but it sets my theological teeth on edge. Here’s an example. See if you catch it.

We live in a world where culture is forever changing the rules. Culture keeps pushing to redefine marriage. Culture adds a new twist on gender identity every five minutes. They tell us we can define our relationships and gender by our own standards. But Christians are to live by a different standard. Christians are to live according to the instructions given to us by our loving Creator.

Did you catch it? It’s subtle. Extremely subtle. 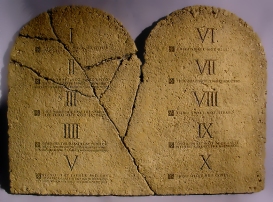 God does not have a different standard for His followers. Gods has given us all the same commands. The Ten Commandments are universal. Christians and non-Christians alike are called to follow God … obey God … trust God.

And none of us can keep those commands. So what makes the Christian different?

Those of who follow Christ should live lives of joyous obedience to Christ. Yes, every man and woman on this planet is to live that way, but since they don’t, we can shine the light of Christ into their lives. Let’s show them the way. Let’s lead them to Christ.

It’s only in Christ that any of us can lead the righteous life He calls us to live.

3 thoughts on “Is God’s Standard Just for Christians?”