What do I stand for?

Popular culture is becoming steadily opposed to Christians. I could write pages of examples from the news where Christians are being shouted down in public forums … businesses are being sued for not embracing what the secular culture says is OK … and others are boycotted and railed against because their beliefs—not their practices, just their beliefs—are at odds with culture.

By and large, most people in our society are not opposed to Jesus. We could resurrect the Doobie Brothers’ song from 1972, “Jesus is Just Alright with Me,” and culture would sing along. People like Jesus. After all, He loves people. He blesses people. According to the pictures, He likes to carry lambs on His shoulders.

It’s all those Christians our culture has problems with. And why not? We’re judgmental, anti-homosexual, and hypocritical. Unfortunately, that is not a totally unfair view; we’ve brought it on ourselves. Instead of pointing to a better way in Jesus, we have been too busy waving the flag of what is wrong with “the other side.”

Unfortunately, the world knows Christians more by what we are against than what we are for.

We need to have strong convictions. We need to stand on biblical principles, ethics, and morality. But we don’t need to be waving the flag of biblical morality as if it is the all-important banner for everyone to stand under. Morality is extremely important, but …

Jesus stood for love and grace. He addressed the matter of sin, but it was the love and light He displayed that changed hearts and lives. He just shined the light of love and grace … and the light revealed our darkness for what it is.

Consider the truths In Ephesians 5:

“Don’t participate in the fruitless works of darkness, but instead expose them” (v. 11).

Many interpret the command to expose the works of darkness as a call to scream and shout against the sins of the culture. But Paul didn’t stop there.

If it’s shameful to mention these things, how do we expose them?  The answer is in the next verses:

“Everything exposed by the light is made visible, for what makes everything visible is light” (vv. 13-14).

Instead of shouting against the darkness, we are to shine a light. The light of Christ. When we live and speak the love and grace of Christ, conviction follows. To my knowledge, no one has ever come to Christ or changed their ways by an advertisement of what Christians are against. But when we lift up Christ and talk of what His love and grace have done for us, change happens. 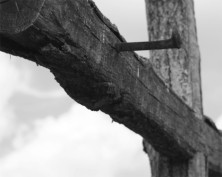 What do I stand for? I want to be known for what I stand for, not what I stand against. It’s not that I am in favor of behavior that is wrong, sinful, and out of step with Scripture, but I am in favor of people—even those who live lifestyles that are wrong. That’s exactly what Jesus did. He embraced “the wrong people” in a very religious Jewish society; He hung out with them—He partied with them—without endorsing their sin.

What do I stand for? I want to make sure people—both friends and strangers—know I stand for love and grace … that I stand with—and for—Jesus.