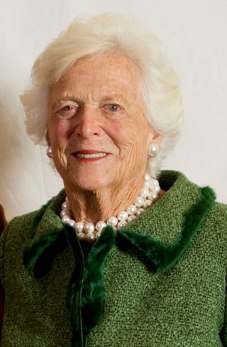 The recent passing of former first lady Barbara Bush brought back a memory of my one experience with this wonderful woman.

It began in 1989. As we traveled home from a youth mission trip, members of a church in Louisiana opened up their homes for us to stay overnight. One of those homes belonged to a Secret Service agent. Although he was not stationed in D.C., he had occasions to travel with the presidents. He commented that the Bushes had been, by far, the most gracious and kindest couple he had ever served with. (Another Secret Service agent recently reported that their code name for Mrs. Bush was “Tranquility” because it captured her character and personality.)

Fast forward one year, and now I was in the throes of planning a mission trip to Baltimore. We would have a free day in the D.C. area, so I sent a letter to Mrs. Bush requesting an opportunity for my students to meet her. (I already knew President Bush was unavailable.) Since we were in West Texas, I played up the West Texas connection.

A month prior to the Baltimore trip, I was with these same students on a canoe trip in Tahlequah, Oklahoma. Arriving at the canoe site, I was handed a note with  a phone number to call. It was the White House, and more specifically, it was Mrs. Bush’s assistant. At Mrs. Bush’s request, she tracked me down (in the days before cell phones) to tell me Mrs. Bush was honored but she would be away from Washington during the time we would be there. She tracked me down.

I look back on that moment and I don’t see just a gracious woman. I see humility.

Humility? Yes, humility. Christians know it is erroneous to define humility as being a passive doormat for others to walk over, but unfortunately, we often embrace the equally erroneous idea that humility means we should view ourselves as unimportant. That’s just not true.

“Do nothing out of selfish ambition or conceit, but in humility consider others as more important than yourselves. Everyone should look out not only for his own interests, but also for the interests of others” (Phil. 2:3-4 CSB).

To see others as more important does not mean you see yourself as unimportant. You are important—you have great worth as a child of God—but in dealing with others, you are to lift up their value and worth. Pride  is a distorted sense of self, but humility leads you to see others as equal before God.

All of us should practice such humility, but this is a defining trait for a great leader.

Someone’s got to be out front taking charge and leading, but we’re more apt to follow someone who treats us as equally important. He or she leads us because they view us as valuable, someone worth leading. The demands on such leadership are great, but they don’t lose sight of the needs of others. In fact, its often the very needs of others that motivates the way they lead.

“Adopt the same attitude as that of Christ Jesus, who, existing in the form of God, did not consider equality with God as something to be exploited” (vv. 5-6).

With humility, be the image of Christ to those around you.

post supports the study “Stand with Humility” in Bible Studies for Life.

9 thoughts on “What Humility Looks Like in a Leader”