Would you knowingly  participate in a slave auction? 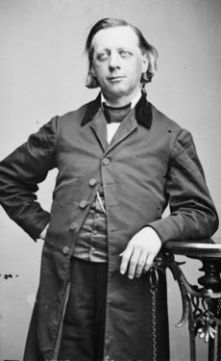 You may be familiar with the book Uncle Tom’s Cabin—the 1852 novel that stirred the anti-slavery movement in America—and its author Harriet Beecher Stowe. Her name is still known, but an equally famous name in her day was her brother: Henry Ward Beecher.

Beecher was a preacher. An abolitionist. And a slave auctioneer.

A young slave named Rose Ward lived in Washington D.C. and had been sold by her owner (who also happened to be her own father). She was slated to be taken south. However, the slave trader who now owned her was moved by her character and offered to let her buy her own freedom. She was temporarily returned to Washington where she was able to raise some of the money. But she was $800 short of the $1200 she needed.

That’s when the Reverend Beecher stepped in. He brought her to his church in Brooklyn and conducted his own slave auction.

After preaching on loving God and loving others from Luke 10:27, he read the account of Jesus healing  a man on the Sabbath. “Then Jesus said to them, ‘I ask you, which is lawful on the Sabbath: to do good or to do evil, to save life or to destroy it?’” (Luke 6:9).  Reverend Beecher had the young woman come to the front of the church.

“And this,” said Mr. Beecher, “is a marketable commodity. Such as she are put into one balance and silver into the other…. What will you do now? May she read her liberty in your eyes? Shall she go out free ? Christ stretched forth His hand and the sick were restored to health ; will you stretch forth your hands and give her that without which life is of little worth ? Let the plates be passed and we will see !”  (A Biography of Rev. Henry Ward Beecher, 298).

Beecher’s mock auction raised the needed funds. Someone even gave a gold ring , and Rose Ward left the church a free woman.

Today we’re abhorred by the thought of slavery , but people are still treated as commodities.

This also happens in America. The American populace may be shocked by that, but we still have others ways—more “acceptable” ways—of treating people as commodities.

People are not commodities, assets, or liabilities. Every person has value, even if for no other apparent reason than the individual was made in the image of God. God created each of us for a purpose—and that purpose has nothing to do with being a commodity to be used by others,

God told the prophet Jeremiah: “Before I formed you in the womb I knew[a] you, before you were born I set you apart; I appointed you as a prophet to the nations” (Jer. 1:5).

Find your purpose in Christ. And do your part to free others from being viewed as commodities, whether assets or liabilities. Help them find their God-given purpose.

post supports the study “Created for a
Purpose” in Bible Studies for Life.

2 thoughts on “Seeing People as Commodities”