No one likes to be tricked.

We’re familiar with the ancient con called the Shell Game. We’re sure we know where the pea is, but … nope. Wrong again. We’ve been duped.

We fall for it enough and, hopefully, we get the idea: we’re not stupid; we’re just being conned.

The biggest con artist is Satan. He knows our weak areas. He knows the areas we’re most vulnerable. And he’ll work those to his advantage.

Paul warned the church to watch for the devil’s con.

The principle is simple: keep an eye out for Satan’s tricks. If he can pull us into sin, he has succeeded in hampering our walk with Christ. Our role as Christ’s representatives has become ineffective.

So what is the biggest tool in Satan’s bag of tricks? One sin is prevalent among believers—and it’s one we don’t often acknowledge. In fact, many of us have learned to live with it.

Seriously, Lynn? That’s the worst sin you can think of?

If I can identify one sin that grips so many believers and keeps them moving forward, this is it. The Apostle Paul would be right there with me because in the section of 2 Corinthians where he wrote of Satan’s schemes he was addressing a matter of restoring a man to the community of faith. No one knows  who this person was or what his sin was, but we do know he repented and sought to be fully restored to his fellow believers. Paul admonished the church to forgive and restore:

“Now instead, you ought to forgive and comfort him, so that he will not be overwhelmed by excessive sorrow. I urge you, therefore, to reaffirm your love for him” (2 Cor. 2:7-8).

Forgive. Don’t hold his past over his head. Don’t go all legalistic on him and only restore him after years of proving himself worthy.

And this is where Paul tied forgiveness to not being outwitted by Satan. Read verse 11 in light of verse 10.

“Anyone you forgive, I also forgive. And what I have forgiven—if there was anything to forgive—I have forgiven in the sight of Christ for your sake, in order that Satan might not outwit us. For we are not unaware of his schemes” (vv. 10-11).

Why is unforgiveness such an effective tool for Satan?  Unforgiveness affects relationships.

Unforgiveness may be a major tool for Satan, but Jesus has a greater tool: forgiveness. “Be kind and compassionate to one another, forgiving each other, just as in Christ God forgave you” (Eph. 4:31).

It’s time to knock down the wall. 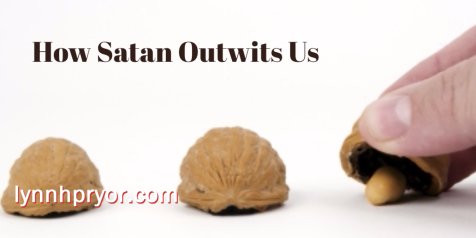 2 thoughts on “How Satan Outwits Us”