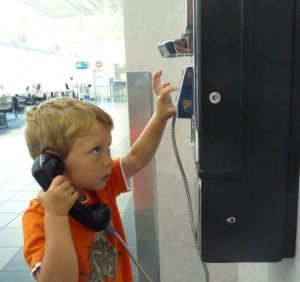 The police do answer 911 calls—even if it does embarrass the pastor.

Our church celebrated my first anniversary as pastor by taking over a local park for a Sunday afternoon picnic. The afternoon included a lot of food, and after a couple of hours, it included the police.

The squad car pulled up and the officer sought out whoever was in charge. Apparently that was me. He informed me that the 911 operator had received multiple calls from the park pavilion pay phone.

It didn’t take long to find the culprit. He was standing right next to me.

My six-year-old son and friends were playing near the pay phone, and play eventually included the phone. They dialed the one number they knew—the number they were taught to use—never realizing the pay phone would connect to the 911 dispatcher even without coins.

They didn’t think they had a connection—but they did.

I’m convinced a lot of people pray the same way they approach 911.  When we call 911, we want help, but we’re not looking for a relationship with the 911 dispatcher. Too many of us look to God for help without really wanting God Himself. “God, fix this for me, and I won’t bother You again.”

God wants us to bother Him. God does not shut us out for non-emergencies nor does a police officer show up telling us we’re making too many requests. God invites us to talk to Him.

Call to me and I will answer you and tell you great and unsearchable things you do not know (Jer. 33:3).

Just talk to God. He’s  fine with that.

This post is based on the study “Pray Fervently” in Bible

One thought on “Bothering God”