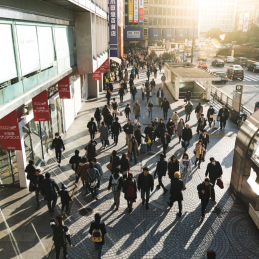 Just for the record, I am all for improving society and culture. But what should that society look like?

I think the best thing I can do is draft my own standards for society, gather like-minded believers, buy a huge chunk of land, and start my own community. We’ll follow the rules I’ve set up (based on biblical principles, of course), and everything will be perfect.

Just one problem: it won’t work.

I’m sure my ideal community would be the closest thing to heaven. (After all, I would be running it.) But history has shown over and over again, it just won’t work. Utopia is beyond our reach.

Early in American history, scores of people flooded onto this continent in hopes of a better life. Even after we became a full-fledged independent country, scores of people continued flooding in for the better life. And this “grand experiment with a democratic republic” was good—but for many it wasn’t good enough. And the great expanse of untapped land (never mind the Native Americans already here) offered the ideal solution for them: Let’s start our own town and lead it according to our own rules and interpretation of Scripture?

Starting your own utopian community was especially popular in the 1800s. Eighty were started in the 1840s alone. It was rather trendy, sort of like putting stick figures of your family on the back of the mini-van. Most of these had a Christian or religious basis (er, the communities, not the stick figures). Probably the two most well known are the Shakers, who practices celibacy, and Oneida Community, where everyone was married to everyone else. (They called it “complex marriage;” I call it sleeping around.) Two communities with opposite views, both espousing their way as integral to a utopian community.

I could write for days on the different utopian communities and their unique standards or beliefs. For example, Fruitlands was a utopian community based on transcendental principles: People are inherently good, society has corrupted us, and we are at our best when we are fully independent and self-sufficient. So how do you achieve this transcendental goal in a community? Don’t eat any meat, don’t consume any “stimulants, don’t use any form of animal labor, don’t use any artificial light, don’t take hot baths, and don’t drink anything but water! (A side note for fans of Little Women: Louisa May Alcott lived for awhile in this community because her father was one of the founders.)

These communities are a fascinating part of our American history, especially considering how unique they were from one another. Burt note this: they are a part of our history, not a part of current culture. Utopian communities don’t last.

The answer is simple: they were created and led by imperfect, fallen, sinful people. And the people that flocked to these communities were imperfect, fallen, sinful people. We’ll never reach a utopia—a perfect place to live—as long as imperfect people are allowed to start them or live in them. The only perfect utopia would be lived under God’s law. His laws are perfect, but we’ve done a remarkably lousy job living up to His laws.

There is a “utopia” in the future of those who follow Christ, but we will only live in it when we are living in His presence in His eternal kingdom. Until then, let me suggest the following:

Instead of running off to start a utopian community, get involved with the culture you’re in. You don’t have to embrace everything in culture, but by your presence—by imitating Christ in the power of His Spirit—infuse that culture with the gospel.

Be Jesus to those around you.

One thought on “Looking for Heaven on Earth”