I hate fake news, and I venture you do too. But we’re not too worried about it if it lines up with what we want to believe.

You’re likely familiar with an event that happened this week in 1864. During the Civil War, Lydia Bixby lost all five of her sons. Casualties of war.   On November 21, President Lincoln sent a letter to the grieving mother.

I have been shown in the files of the War Department a statement of the Adjutant General of Massachusetts that you are the mother of five sons who have died gloriously on the field of battle.

I feel how weak and fruitless must be any word of mine which should attempt to beguile you from the grief of a loss so overwhelming. But I cannot refrain from tendering to you the consolation that may be found in the thanks of the Republic they died to save.

I pray that our Heavenly Father may assuage the anguish of your bereavement, and leave you only the cherished memory of the loved and lost, and the solemn pride that must be yours to have laid so costly a sacrifice upon the altar of Freedom.

Yours, very sincerely and respectfully,
A. Lincoln.

Newspapers picked up the letter and printed it. Copies were printed and sold as souvenirs in the years after Lincoln died. And why not? It shows the heart and compassion of the president everyone loved and admired.

I’ll tell you why not. Lincoln likely did not write the letter.

Wherever the newspapers got the story, they ran with it because … well, it made good copy. We love heart-wrenching stories. It made the president look saintly, especially in the years after his death when the nation grieved. So what if it may or may not be quite accurate?

It was fake news, and the story got a second life when it featured prominently in Steven Spielberg’s Saving Private Ryan (1998).

Why can’t we just stick with what’s true, no matter how mundane it is?

In 2011, my wife and I had the opportunity to attend an early viewing of the movie Soul Surfer, the true story of Bethany Hamilton, a skilled surfer who lost an arm in a shark attack. The movie focused on the struggles Bethany had after the attack—both physically and emotionally—as she tried to resume her surfing career. OK, pretty decent movie (and that’s saying something, considering my dislike of Christian movies). After the movie, there was a Q&A with one of the producers. In response to a question, he pointed out that, in reality, Bethany did not struggle with fear or confidence. She got right back on her surfboard as soon as she was could. They had to “Hollywood-ize” it and add some drama.

Christian, we’ve got to stop circulating outlandish stories simply because they support our viewpoint.  We must speak and repost  the truth—without embellishment. We should be the front lines of truth.

And while I’m at it … pastor, quit embellishing your sermon illustrations. Quit making yourself the hero. I’ve read more than one account where the writer/preacher was running through the airport, stopped to help a child, and the child asked, “Mister, are you Jesus?” (Apparently our nation’s airports are overrun with preachers and kids in trouble.) Be men of truth and integrity.

Before you use a story, do some research. Verify it. Stick with the truth. And if Lincoln didn’t write that letter, don’t tell the story—even if it does add the right effect.

So why do we tolerate and even circulate fake stories? They support what we want to believe. Sure, we can get folks worked up with fake news or an embellished story, but TRUTH MATTERS. 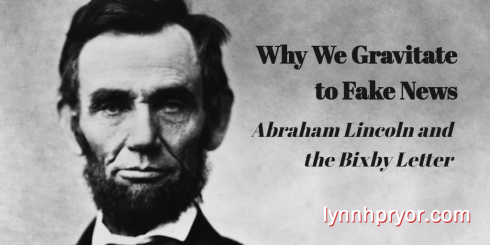