Sometimes it just doesn’t pay to be nice to people, does it?

Someone stopped by my office at lunch time and said, “Smokey Burgers at the Farmer’s Market. Wanna go?” I weighed the offer against the peanut butter sandwich (no jelly) I brought and walked out the door.

(If you are ever within 10 miles of my office and want to do lunch, just ask. I’ll go … unless the bread on my peanut butter sandwich is particularly fresh that day. On second thought, I’ll go.)

Fifteen minutes later, I’m in line with my smokey burger and ready to pay. The cashier smiled and said, “It’s taken care of.” I’m pretty sharp when it comes to these things, and I realized my friend, who had just purchased his lunch in front on me, paid for mine as well.

I made a quick decision. I told the cashier I’d like to pay for the guy behind me. Pay it forward. I had heard the stories of restaurants where one person bought the meal or coffee of the person behind them,  that person responded by paying for the person behind him, and on it goes.  Sounds like the plot of a Hallmark movie, but it happens.

I’m scrambling to buy the guy’s lunch before he gets any closer, but the cashier is slow. I’m finally walking away with my tray when I hear the cashier say, “It’s taken care of.” Here’s where it gets heartwarming. The guy looked at her—only at her—and said, “Thanks.” Then just walked away.

So much for pay it forward. I guess he missed the point.

But maybe I’m the one who missed the point. While I didn’t want to hear a personal thank you from a stranger, I did want him to acknowledge in some way that someone bought his lunch. My first thought was, “You ingrate. You just took the free lunch without a second thought. Why didn’t you pay it forward?”

Sure, it would’ve been nice to hear the pay-it-forward moment turned into a movement that continued for three straight weeks, got a write-up by ABC News, and brought healing between rival street gangs.  My reaction to this stranger is proof I had made the moment about me. Instead of just wanting to be kind to a total stranger, I was more interested in “starting a movement.” 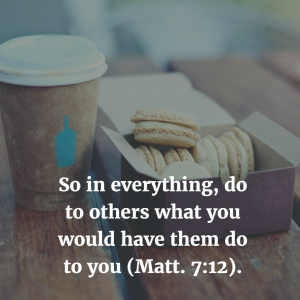 In the end, I was looking for some kind of payback. And for the moment, I forgot about Jesus’ words about giving. “Do not let your left hand know what your right hand is doing” (Matt. 6:3).

Sometimes it just doesn’t pay to be nice to people.

And it shouldn’t have to.

post supports the study “Transformed in My Actions” in Bible Studies for Life.

A printable version is available to share with others: The Shortest Movement Ever.

2 thoughts on “The Shortest Movement. Ever.”