Happy 25th birthday to the Chunnel!

I’m not paying homage to a chocolate funnel cake, although that would be a good idea. (Tennessee State Fair, I’m talking to you.) 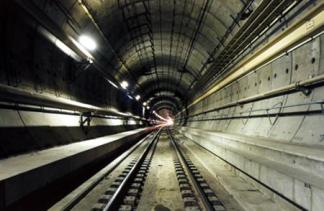 The Chunnel is the tunnel that goes under the English Channel, connecting England and France. The tunnel is only 31 miles long, but it took them four years to dig three tubes, making close to 95 miles of dirt to remove. On December 1, 1990, the workers broke through with an opening the size of a car.

Oh, sure, it took another four years to get the tunnel completed, but I think that initial breakthrough was significant considering the two countries’ history.

England and France have not always been the best of neighbors. That’s like saying Seinfeld and Newman had an occasional tiff. England and France had it out in at least five wars, including one that lasted 116 years. (They called it the Hundred Years’ Year because they either couldn’t count or it just took up less room on their 15th-century Twitter feeds.)

Most of us get our understanding of French-English relations from the scholarly source of Monty Python.

A tunnel that overcame (undercame?) their biggest barrier, the English Channel, symbolizes for me the wall of hostility is gone.

It cost $21 billion to dig and complete the Chunnel. (I wonder, though, if that was figured by the same accountant who called it the Hundred Years’ War.)

Another barrier was removed at an even greater cost. Our sin separates us from God, but Jesus Christ removed the barrier at the cost of His own life.

But your iniquities have separated you from your God; your sins have hidden his face from you, so that he will not hear (Isa. 59:2).

But now in Christ Jesus you who once were far away have been brought near by the blood of Christ (Eph. 2:13).

We can have an intimate relationship with Christ, who loves us and created us. No more separation. Bodies of water—like the English Channel—have always symbolized separation, so consider what John saw in his vision of heaven: “Then I saw ‘a new heaven and a new earth,’ for the first heaven and the first earth had passed away, and there was no longer any sea” (Rev. 21:1). Absolutely no more separation from God—for all eternity

It didn’t take a tunnel to get there. Just the willing sacrifice of Christ.