Did you see the movie The Two Popes that released in 2019? The movie deals with an interesting event in recent Catholic history, and it was well done with two veteran actors, Anthony Hopkins and Jonathan Pryce. But it was the third principal player in this movie to which I want to draw your attention. 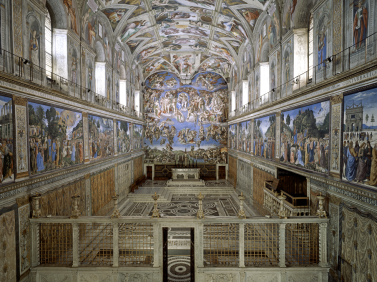 OK, it was not the real Sistine Chapel, but the set they created for this movie was phenomenal. Understandably, the Vatican is rather picky about letting film crews use the Sistine Chapel, so over the years, studios have done their best to recreate portions of the Chapel for their movies. But for The Two Popes, Netflix went all out and recreated the full interior of the chapel. In fact, it is slightly largely than the actual interior of the chapel.

That’s no small feat considering that the frescoes on the ceiling cover 12,000 square feet. Netflix didn’t cheat and use CGI to create the frescoes. It took Michelangelo four years to do the original, but Netflix’s production designer hired a full team of artists skilled in recreating classical paintings to do it in less than ten weeks.

And recreate it they did. Netflix spent $5 million to recreate the Sistine Chapel, and to me, it’s the star of the movie.

That was over three years ago. Whatever became of this incredible reproduction? As soon as filming was complete, they tore it down! Seriously, they took a wrecking ball to it. The screenwriter, Anthony McCarten, watched its destruction and described it as a crime. Sure, it’s not exactly something that can be stored in the back of the garage, but to destroy such a meticulous reproduction of a work of art? It’s sad.

Original or not, I find it sad when any work of art is destroyed.

We were created in God’s image. Unfortunately, we have taken God’s crowning work of creation and ruined it with our sin. With our self-centeredness and wickedness, we have destroyed what God intended to be His masterpiece.

But then there’s Jesus. “The Son is the radiance of God’s glory and the exact expression of his nature” (Heb. 1:3). Jesus is not just some reproduction; He is God—and as God He entered our world at Christmas to show us God. Jesus came to restore the image of God in us. He did this by dying on a cross and removing the sin that mars His image in us. He makes us pure and clean and whole. He has saved His work of art, and as we grow in Christ, He continues to make us more and more like Him.

“He who started a good work in you will carry it on to completion until the day of Christ Jesus” (Phil. 1:6).

You’re not the Sistine Chapel. You are something greater. You are created in the image of God Himself. Let Him restore you. Let Him restore the beauty and joy He intended for you. You are His workmanship, so let that shine through.

“For we are his workmanship, created in Christ Jesus for good works, which God prepared ahead of time for us to do” (Eph. 2:10).

If you would like a printable version of this, check out PrintFriendly.

One thought on “Would You Destroy a Masterpiece?”