Ever heard a piece of music and wondered, “Where have I heard that before?” You might also look at something and say, “I think I’ve seen this before.” A dusty memory is stirred.

It’s different with smells. When you smell a familiar smell, you’re instantly transported back to a time and place. Smell is the strongest sense we have, in the sense that it carries the strongest memories for a lifetime. You might smell a certain dish cooking in the kitchen and recall vivid memories of your mother cooking that same recipe when you were a kid. Whenever I smell honeysuckle, I am immediately transported to my elementary school where honeysuckle grew.

I was recently reading through 2 Corinthians and came to a passage that mentioned aroma. I began to ponder other references to smells in Scripture and how they can describe our walk with Christ.

How I once smelled.

Jesus’s greatest miracle was surely the raising of His friend Lazarus. We know of two other occasions where Jesus resuscitated someone (Luke 7:11-17; 8:40-56), but Lazarus had been dead for four days. The common belief in the Jewish culture was that when a person died, his spirt hung around for three days. Just because. After the third day, the spirit left. That’s why Jesus delayed in coming to Lazarus. Raising his friend after four days in the tomb would leave no doubt that Lazarus was (to quote the Munchkin coroner in The Wizard of Oz), “not merely, but really most sincerely dead.” No one questioned that Lazarus was really most sincerely dead!

That’s why, when Jesus came to the tomb and asked for the stone to be rolled away, Martha said, “Lord, there is already a stench because he has been dead four days” (John 11:39).

Death stinks, literally and figuratively. Yet, that is the state we are all in apart from Christ. “You were dead in your trespasses and sins” (Eph. 2:1). Even as Jesus raised Lazarus from the dead, He raises us to new life. He conquered sin and death for us. In Christ, we are made new, and the stench of death is removed.

How I smell to others.

The apostle Paul used an image that would have been familiar to his Corinthian audience: a military procession. The victorious Rome army would march into Rome with the defeated enemies in tow as captives. “But thanks be to God, who always leads us in Christ’s triumphal procession” (2 Cor. 2:14). We were God’s enemies, but Christ defeated death, and now we belong to Him. Instead of being slaves to sin, we are now servants of Jesus Christ.

Paul added, “ … and through us spreads the aroma of the knowledge of him in every place.” Both Jewish and Roman cultures were familiar with the use of burning fragrances to God, false deities, and rulers. As this military procession marched into town, the fragrances burned to the conquering king and his deity would mean different things to different groups. To those who were victorious, it was great! But to those who were defeated, that aroma spelled the end of freedom and life as they knew it. 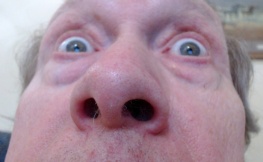 Christ is the conquering King and “we [believers] are the fragrance of Christ.” To those who readily trust and acknowledge Jesus as Lord, we smell good! But to those who live for themselves and do not confess Christ, the message of the gospel is not a pleasing smell. “To some we are an aroma of death leading to death, but to others, an aroma of life leading to life” (v. 16). The fragrance of Christ that comes from a believer only highlights the smell of death on those apart from Christ. This falls right in line with the metaphor of light. As we let the light of Christ shine through us, it shines on others and reveals the darkness of their own lives. It exposes what others would rather keep hid.

We smell different than the world, and while that repels many, others are intrigued. When we live lives of integrity, love, and grace, ever pointing to Christ rather than to ourselves, we make “the teaching about God our Savior attractive (Titus 2:10 NIV).”

How I smell to God.

In John’s vision of the heavenly throne, he saw this: “When he took the scroll, the four living creatures and the twenty-four elders fell down before the Lamb. Each one had a harp and golden bowls filled with incense, which are the prayers of the saints” (Rev. 5:8).

Your prayers matter. In all His work of overseeing and sustaining the universe, God is fully aware of your prayers, even as the aroma of incense rises before His throne. Your prayers reflect a dependence on God, a desire for Him to do what only He can do.

I want you to do something with this aromatic information. Pray to God, and let your words go to Him as a pleasing aroma. In that prayer, thank Him for delivering you from the stench of death. Thank Him for new life. And ask Him to work through you so that, as you interact with other people during the day, your words, attitudes, and actions would be an aroma that attracts people to the One you love and follow.

Related Blog: What Would Your Friends Say You Smell Like?