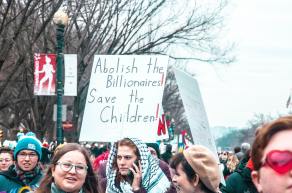 I’m a history nerd, and if history has taught me anything, it’s this: socialism does not work. So why is socialism raising its ineffective head these days?

As if there’s a right way to do socialism.

Try explaining this to some Millennials. According to a Reason-Rupe survey, 58% of Americans have a negative view of socialism, but if you isolate that to just those 18-24, 58% of them think favorably of socialism! The percentage drops as the age groups increase, but still 43% of those 25-34 have a favorable view of socialism.

That’s right. There’s a definite movement to merge socialism with the Bible. At this point, let me remind you what is at the heart of socialism. Socialism is a purely materialistic view of the world. While Buddhists define suffering as desire, Socialists define suffering as the result of unequal wealth distribution. The Buddhist solution to suffering is to remove desire, but the socialist solution is to fulfill desire—and that is done by redistributing the wealth of others. From a biblical standpoint, socialism is coveting what others have and using government means to steal. So right there, socialist breaks two of the Ten Commandments.

So how is the Bible used to justify socialism?

Here are seven principles straight from Scripture on how we should live and act.

This contentment is at the heart of why Christianity offers so much more than socialism.

Christianity works; socialism doesn’t. Socialism doesn’t rescue anyone; Christianity points us to a Savior who rescues us from sin and defeat. When we rest in Him, that contentment leads us to reflect Christ in how we help others. Furthermore, living the Christian life does more than help ease the burdens of others; it points them to the greater burden—their sin and lost state—and to a salvation that is infinitely greater than any financial security.

The early church lived that out. Look at how they loved each other and shared voluntarily …

Now all the believers were together and held all things in common. They sold their possessions and property and distributed the proceeds to all, as any had need. Every day they devoted themselves to meeting together in the temple, and broke bread from house to house. They ate their food with joyful and sincere hearts, praising God and enjoying the favor of all the people” (Acts 2:44-47).

… and look at it’s impact on those who witnessed this love in action.

“Every day the Lord added to their number those who were being saved” (v. 47)

Let’s be generous with the love and grace of Christ.