The more you want to live for Christ and follow Him wholeheartedly, the harder it seems. Why? Satan doesn’t want you to. But you can make it easy on yourself with this tip from India’s history.

In northern India, the Rajputs were the warrior class in the 6th-12th centuries. Apparently, they took their fighting very seriously. Even the women joined in battles.

History records battles in which the Rajputs rode Marwari horses, horses with funky ears and particularly adept at handling desert heat. What was unusual about these horses was how the Rajputs would dress them up. They dressed them to look like elephants.

Some armies used elephants in battle. It does something to a soldier’s morale when a herd of elephants comes charging against him. It’s hard to stand and fight with six tons of elephant charging at you and an enemy on his back chunking spears. 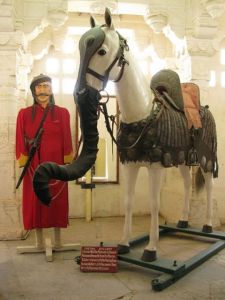 But elephants won’t attack other elephants. So here came the enemy on the elephants and the elephants would stop because …. oh, look at the cute baby elephant! Only it was a horse dressed up to look like an elephant. The horse would rear up, place his front hooves on the head of the elephant, and the Rajput warrior could easily attack the enemy.

If you look like an elephant, you can avoid being attacked by the enemy on an elephant.

And if you look like the world, you can avoid being attacked by Satan.

Why should Satan attack? His desire is to keep you from living for Christ, from conforming to the image of the Son. Unfortunately, too many believers make Satan’s work easy. When we already look and act like the world, he has no reason to tempt or attack.

So if you’re tired of being spiritually attacked, just give in to the ways and enticements of the world. Satan will leave you alone.

You’re no friend of God.

“You adulterous people, don’t you know that friendship with the world means enmity against God? Therefore, anyone who chooses to be a friend of the world becomes an enemy of God” (Jas. 4:4).

Me? I’d rather stand with God.

“The world and its desires pass away, but whoever does the will of God lives forever” (v. 17).

Yes, it’s a battle, but we don’t stand alone. Jesus stands with us. The Holy Spirit is in us. The same power that raised Jesus from the dead is with us (Eph. 1:19-20), giving us the strength to withstand temptation even as Jesus did.

So no horsing around (pun intended) with the ways of the world. Stand strong in Christ. It’s worth it.

post supports the study “The Culmination of Our Hope” in Bible Studies for Life and YOU.

5 thoughts on “How to Avoid Attacks by Satan”