We are in the thick of primary season. You can’t turn cable TV on for longer than five minutes before some candidate comes on with his or her commercial touting why they love kittens and should be our next president. Hoo boy. It almost makes me long for the commercials touting the newest prescription medicine that treats the disease-of-the-week in spite of its long list of side effects. (May cause death.) Almost.

To be sure, the primaries are an important process. They weed out the sincere wannabees from those who have more money to spend campaigning. Sorry. Strike that last comment from the record. PRIMARIES ARE AN IMPORTANT PART OF THE PROCESS.

And, by golly, we want to make sure God is on our side. We want God to be fully behind our political party of choice. We want God’s halo of approval shining around the candidate we think loves kittens more than the others and is the best presidential material. But before we get high and holy and presumptuous about God standing with us in support of Candidate #237, we might want to reconsider our starting point. 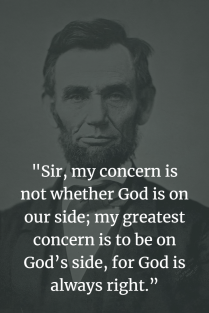 I don’t know if the following Lincoln anecdote is true (I can’t find the original source), but it is a fitting story. We know Lincoln’s greatest challenge during his presidency was that pesky Civil War. During the thick of the conflict, one of Lincoln’s advisors quipped that he was sure glad God was on the side of the Union. Lincoln simply said, “Sir, my concern is not whether God is on our side; my greatest concern is to be on God’s side, for God is always right.”

Shouldn’t we prayerfully and humbly evaluate whether we are on God’s side and are seeking the things of God?

The Book of Joshua recounts the history of the Israelites settling into the promised land. God had promised this land to Abraham, and they had been charged to take possession. It would not be easy, but the charge had come from God who also told Joshua: “Haven’t I commanded you: be strong and courageous? Do not be afraid or discouraged, for the Lord your God is with you wherever you go” (Josh. 1:9).

A few chapters later, Joshua “looked up and saw a man standing in front of him with a drawn sword in his hand. Joshua approached him and asked, “Are you for us or for our enemies?”

NEITHER?? God had already told Joshua, ” I have given you every place where the sole of your foot treads, just as I promised Moses,” yet now God was saying He was neither for them or for their enemies.

God’s favor is not carte blanche. As the Israelites trusted Him and remained obedient to Him, they would experience victory and blessing. That’s what they did when they came against Jericho; God blessed and favored their obedience. However, the very next battle was a rousing defeat because of disobedience among the Israelites.

By the same token, Jericho could have avoided destruction and experienced the favor of God had they trusted Him and sought to follow Him. (Only Rahab and her family did so, and they were spared.) We see the same thing in Jonah’s encounter with the wicked city of Nineveh. Jonah was obedient to pronounce God’s judgment on the city, but its inhabitants repented and they experienced God’s favor. (See Jonah 3–4.)

So if God is not automatically for us or against our opponents, who is He for? He stands with those who recognize His lordship and seek to honor Him through their obedience.

Yeah, I know. Some of you just took offense at that. But there are sincere Christians on both sides of the political debate. Really. I’ve actually met some. But my desire is not to get into a discussion of which side is right. (And for those who think I’m being evasive, I do think there are many political positions that are flat out wrong. Biblically wrong.)

My desire is to be sure we are on God’s side.

“And whatever you do, in word or in deed, do everything in the name of the Lord Jesus, giving thanks to God the Father through him” (Col. 3:17).

2 thoughts on ““Is God on Our Side?” is the Wrong Question”