God is always at work. Even in those “unimportant” moments in our lives. Even when we can’t see His hand, He’s there—and He’s at work.

That truth can often be hard to remember. A lot of us look at our country and we fear the future. The constant talk of impeachment … the fear that either (1) the Republicans win the White House again or (3) the Democrats take up residence has a lot of people concerned. These aren’t dark days, but many wonder if dark days are ahead. 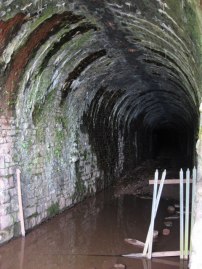 On a personal level, a lot of us feel we’re in that tunnel of darkness now—or we see the tunnel coming. Health issues … adult children choosing a different path … the constant tug of dysfunction in the family … and on and on can make us dread what’s coming.

I want to move forward, but I feel like I’m moving backward. I’m entering a dark period for my life, and I wonder: will I ever come out?

Most of us are familiar with the historical reference to the Dark Ages. Centuries earlier culture was enriched by the Greek Empire. Of course, the Greeks eventually fell and along came the Roman Empire. In many ways, Rome brought the Western world together. It was certainly not a perfect time, but in spite of the occasion persecutions, the Roman Empire allowed the gospel of Christ to spread. Christianity’s influence began to be felt more and more, eventually leading to the conversion of the Emperor Constantine. We can debate whether Constantine became a true believer, but one thing’s for certain: he made Christianity legal. Christianity ultimately became The Religion of the Empire.

But the Empire declined and finally fell. And with that, we entered [cue trumpet blast] the Dark Ages. Historically, we like to pass over the Dark Ages because they are so … well, y’know, dark. We’re led to believe culture, the arts, and education took a long vacation. People wallowed in ignorance until [cue the second trumpet blast] the Renaissance.

We love the Renaissance. It was a period of great literature and the rediscovery of philosophy. And let’s not forget all that art! But it wasn’t until the 19th century that historian Jacob Burckhardt called this period the Renaissance. He saw the Greeks and Romans as great proprietors of culture and learning. All that ended in the fifth century, and supposedly we didn’t rediscover such culture until the fifteenth century. So essentially he treated a thousand years of Western history like that half-gallon of two-percent milk that expired around Christmas. It just keeps getting ignored, and it’s best not to open it.

It’s unfortunate that this historian’s label of the Middle ages stuck. The Dark Ages was no renaissance, but it was far from dark. Without digging further, we might assume education, science, culture, and the Christian faith took a hiatus. We think there was no movement forward, but that’s far from the truth.

God is at work—and has always been at work. Even we label something as a dark era, it was far from dark in God’s eyes. He was at work—and He is at work today. I can’t answer for the next year or two, not even the next few months. Will the stock market improve or get worse? Will culture continue to slide the way of a bad Super Bowl halftime show? Will our health or job situation get better or worse? Again, I can’t answer, but I know this one truth:

I have no need to fear the future. In fact, I embrace it. It may seem dark, but God is already there—and He holds my hand.

4 thoughts on “Do You Fear the Future—or Embrace It?”