You’ve probably heard the phrase, “Behind every great man is a great woman”. The insinuation that no one person displays greatness in a vacuum of himself has some validity. Great leaders, both male and female, rarely achieve much without the help of others—whether it’s in the framework of a team or personal relationships.

For instance, trailblazers Lewis and Clark, forged toward the Pacific Ocean in their famous exploration of the west in the early 19th century. It was a formidable task for anyone, but it was a young Shoshone woman named Sacagawea who was instrumental in Lewis and Clark’s success. She not only served as a trailblazer for the Corps of Discovery, but she intervened for the men who were not familiar with Native American culture or language. She wasn’t just behind those great men—she was in front of them, beside them, and in the middle of their achievement. 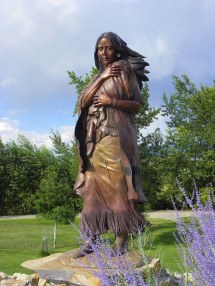 Don’t think for a moment Lewis and Clark didn’t recognize her value. In their journals, Lewis mentions her fortitude and resolution and Clark later praised her as the “pilot” that took them through the country.[1]

You might be familiar with Sacagawea’s name, but did you know she was kidnapped when she was eleven or twelve? Did you know she became (not of her choice) one of the wives of French Canadian trapper Toussaint Charbonneau, a man who would have little value on the journey? Did you know she had a baby in the midst of their trip? This teenage mother not only endured the hardships of navigating the west, but she nursed a baby, fell ill with a fever, and even rescued Lewis and Clarks’ journals when a canoe capsized! She navigated tense relationships in their encounter with the Shoshone, served as an interpreter, and helped broker a deal that brought the Corps the horses they needed for their journey.

Sacagawea made her mark on American history, but there’s also an Old Testament woman who made her mark by reconciling a conflict between her unwise husband and King David. Her name is Abigail and her story is found in 1 Samuel 25. Similar to Sacagawea, her marriage to Nabal was most likely arranged or forced. While Scripture describes Abigail as wise and intelligent, Nabal is characterized as harsh and evil. The literal meaning of intelligent in this passage was not being book smart—but Abigail was good of understanding. She showed great emotional intelligence and maturity in the way she interceded for Nabal, whose name literally meant fool. In a conflict that most likely would have ended in bloodshed and retaliation, Abigail interceded for her entire household by showing humility, resourcefulness, generosity, and courage. Like Sacagawea, she spoke the language of wisdom and peace.

What about you? How can you display the same characteristics Abigail had when faced with potential conflict? As God’s people we, too, should pursue peace. As Colossians 3:15 says, “And let the peace of Christ, to which you were also called in one body, rule your hearts. And be thankful.” When we preserve unity in the body, God is glorified and the body of Christ is strengthened. As followers of Christ, may we all be behind a great God.

3 thoughts on “Behind Every Great Man …”