This is turning into a typical April: tragic. So many of us relish April because of the mild weather and full bloom of spring, but historically, April carries a lot of tragedy.

I could’ve mentioned other tragic events in this list, and sadly some of these events receive scant notice, but they’re no less tragic. For example, we are all familiar with the lore and tragedy of the Titanic, but it was not our worst maritime disaster. That distinction falls to the Sultana.

Never heard of the Sultana? You’re not alone.

The Sultana was one of those big honkin’ Mississippi River steamboats. The ship was in Cairo, Illinois when the captain heard the news that the Civil War had ended. He grabbed armloads of newspapers and immediately headed south to spread the news. On its return trip from New Orleans, the Sultana stopped in Vicksburg. The Union army offered the captain a deal. They had thousands of Union troops who had been released from Confederate prisons. These men wanted to go home, and the army would pay the captain $2.75 per enlisted man and $8 per officer.

Obviously, the more men the captain took on board meant more money in his pocket. That’s how a ship built to carry 376 people was carrying over 2,300 people—plus 100 bushels of coal and several hundred cows, horses, and mules.

So now the Sultana’s boilers were working overtime to carry all this massive weight. On top of that, spring rains had caused the Mississippi to flood, and the Sultana was working hard against the strong currents. It was only a matter of time before … 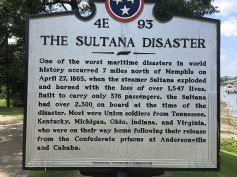 At 2:00 a.m. on April 27, 1865, a few miles north of Memphis, one boiler exploded immediately followed by two more. The boilers had too much pressure and not enough water. Many passengers were scalded to death or thrown mangled and lifeless into the river. The wooden steamship burned quickly, leaving those still alive two choices: burn or drown.

Men thrashed in the water, fighting one another over floating debris—wooden doors, bales of hay, mule carcasses, barrels, anything—to cling to. Those who couldn’t swim frantically grasped onto and dragged down those who could. And many, after surviving the blast, the fire, the suffocating smoke, the violent clashes in the icy river, eventually succumbed to hypothermia, their bodies already weakened by war and imprisonment.

That night 1,547 people died, about 30 more than from the sinking of the Titanic. It is America’s worst maritime disaster yet one of the most forgotten.

So why did this tragic event get little notice? Partly because the people were weary of reading about death. After four years of constant reporting of the Civil War—thousands killed here, thousands killed there—they had become numb and cauterized to reports of death. But there was a much bigger reason.

Less than two weeks earlier, President Lincoln had been assassinated. The newspapers were focused on Lincoln’s death and the unfolding story of capturing John Wilkes Booth and his conspirators. The news of 1865 was so focused on one tragedy that another was virtually ignored. Yet for the hundreds of families waiting for sons and fathers who never came home, the tragedy was never forgotten.

For many of us, the tragedy we’re facing—job loss, death of a loved one, cancer, a prodigal child—is overshadowed by someone else’s hurt and suffering. We suffer in silence. We’re not the kind to make a public display of our hurts, and even if we do, it seems that the pain and hurts of others draw more attention and sympathy.

But we do not go unnoticed. God sees. That may sound trite to some people, but it rings true. God not only sees, He cares. Even in our rebellion, God’s heart goes out to us.

“Isn’t Ephraim a precious son to me, a delightful child? Whenever I speak against him, I certainly still think about him. Therefore, my inner being yearns for him; I will truly have compassion on him. This is the Lord’s declaration” (Jer. 31:20).

Those around us may not notice, but the angels in heaven notice.

“There is joy in the presence of God’s angels over one sinner who repents” (Luke 15:10).

I infer from that verse the angels not only see and care when we repent, but they see all aspects of our lives.

One day this present life will end. For the believer, this life will transfer into a life in the presence of God. Don’t be pulled down by the fact your hurt and pain may be overlooked today; rest in the knowledge that God knows and cares, and one day, all this will make sense.

“Therefore we do not give up. Even though our outer person is being destroyed, our inner person is being renewed day by day. For our momentary light affliction is producing for us an absolutely incomparable eternal weight of glory. So we do not focus on what is seen, but on what is unseen. For what is seen is temporary, but what is unseen is eternal” (2 Cor. 4:16-18).

One thought on “When Your Pain Goes Unnoticed”