Arthur C. Brooks wrote a recent New York Times op-ed piece that is well worth your time to read. In his article “Our Culture of Contempt” he captured the essence of the division and fighting in America. Allow me to note some of his high points and offer my own conclusion.

No one would argue that we are a divided country. (It’s one of the few things we don’t disagree on.) Research is showing that we have not been this politically polarized since the Civil War. Even as families divided over the issue of slavery in the 19th century, families today are divided over whether Trump is a great leader or a buffoon. Or the issue of guns … or immigration … or whatever Republicans and Democrats will be haggling over next week. 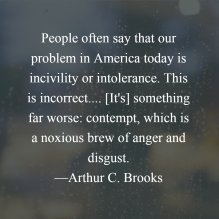 A problem grows out of this. If you are opposed to my love-based views, then you must be motivated by hate. As Brooks points out, that attitude moves us way beyond a lack of civility. We view the other side with contempt. Mean, nasty, ugly contempt.

How can we ever have a constructive conversation when we’re fueled by contempt? And if the other side carries an equal amount of contempt for us, well, we come to more than a stalemate; we eventually come to blows.

This is where the church in America can rise up and have a great influence on our culture.

Believers can have convictions and take a stand, but we must, first of all, be doubly-sure our convictions are grounded in Scripture. But how we express those convictions can turn the tide in our political landscape.

You say your ideology is grounded in love for God and love for others? Great. Make sure that includes love for those on the other side.

Christians, we will never make a difference if we speak disparagingly of the other side. Even when we make a joke and then excuse it by saying “I was only kidding,” we’ve blown any chance of having a positive impact. We Christians are too much like the world when it comes to expressing our political views. We make ourselves feel better by joining with like-minded people and ranting against our opponents. But in the end, all we’ve done is rant.

When will those of us in the church stop ranting and start listening? When will we set aside our political slogans and memes and talk with the other side with civility and … uh-oh, love?

What can you do to reflect Christ in our national political debate?

“Above all, love each other deeply, because love covers over a multitude of sins” (1 Pet. 4:8).

Frankly, to do anything less than what is called for in the passages I’ve mentioned is to be outside the will of God. And no political tirade or dig at the other side is worth that.

2 thoughts on “Learning How to Disagree”