I hate fake news, and I venture you do too. But we’re not too worried about it if it lines up with what we want to believe. 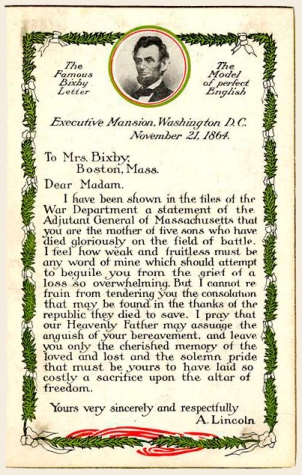 You’re likely familiar with a letter Abraham Lincoln wrote on November 21, 1864. During the Civil War, Lydia Bixby lost all five of her sons. Casualties of war. So President Lincoln sent a letter to the grieving mother.

I have been shown in the files of the War Department a statement of the Adjutant General of Massachusetts that you are the mother of five sons who have died gloriously on the field of battle.

I feel how weak and fruitless must be any word of mine which should attempt to beguile you from the grief of a loss so overwhelming. But I cannot refrain from tendering to you the consolation that may be found in the thanks of the Republic they died to save.

I pray that our Heavenly Father may assuage the anguish of your bereavement, and leave you only the cherished memory of the loved and lost, and the solemn pride that must be yours to have laid so costly a sacrifice upon the altar of Freedom.

Yours, very sincerely and respectfully,
A. Lincoln.

Newspapers picked up the letter and printed it. Copies were printed and sold as souvenirs in the years after Lincoln died. And why not? It shows the heart and compassion of the president everyone loved and admired.

I’ll tell you why not. Lincoln likely did not write the letter.

Wherever the newspapers got the story, they ran with it because … well, it made good copy. We love heart-wrenching stories. It made the president look saintly, especially in the years after his death when the nation grieved. So what if it may or may not be quite accurate?

It was fake news, and the story got a second life when it featured prominently in Steven Spielberg’s Saving Private Ryan (1998).

Yet it seems few of us fact-check when what’s being reported lines up with what we want to believe.

And that’s a problem when it comes to our spiritual lives as well. We have no shortage of false religions, cults, and even bad theology among Christians. Yet people gravitate to them because the false teaching fits what they already think … or fits what they want to believe … or “it just sounds right to me.”

Every teacher, every preacher, and yes, even every Bible study curriculum needs to be fact-checked against God’s Word.  And that means reading Scripture, studying Scripture, and practicing good principles of interpretation (hermeneutics). That’s important, because we don’t want to make the Bible say what we want it to say. We hear enough bad interpretation from the cults. 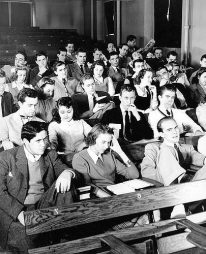 Recently, my wife and I popped into another church and we visited one of their Bible study groups. It was one of those groups where the teacher just “does his own thing,” and he lectured to rows of adults soaking it in. What they were soaking in was his poor teaching. He spoke with an air of authority, but he gave himself away (to me) by his inability to use the Hebrew correctly. He wanted to “go deep” in the Scripture by reading things into the passage the inspired writer never said or intended. By the end of the lecture, his poor interpretation was crossing the line into bad theology. And his group of 50 people were soaking it in.

My wife, whose degree is in accounting and not theology, quizzed me on the drive home. She said, ” He was saying things that just didn’t ring right in my ears.”

“Now the Berean Jews were of more noble character than those in Thessalonica,for they received the message with great eagerness and examined the Scriptures every day to see if what Paul said was true” (Acts 17:11).

They fact-checked the apostle Paul!

Let’s not fall for the fake news behind cults and other religions. Truth is found in God’s Word, and we stay grounded in that truth as we diligently study it.

“Do your best to present yourself to God as one approved, a worker who does not need to be ashamed and who correctly handles the word of truth” (2 Tim. 2:15).

post supports the study “When False Religions Deceive” in Bible Studies for Life.

5 thoughts on “The Lure of Fake News”