First of all, I am married to my best friend.

However, my relationship with my wife of 36+ years is far more than a close friendship. Far more. To relegate marriage to nothing more than a legal bond between two best friends cheapens the sanctity of marriage. But that doesn’t keep people from doing so.

You may be familiar with the names Quentin Esme Brown and Peter Cary Peterson. She is a popular well-known socialite, and he is a former reality TV actor on NYC Prep. The two  also happen to be best friends since they were kids.

Aw, that’s nice. But they’ve taken their friendship to the next level and got married last January. But this is no typical marriage. There is no romance between them. There will be no intimacy or sexual relations between them.  In fact, they’re free to date and sleep with other people because their marriage is just a bond between two friends. 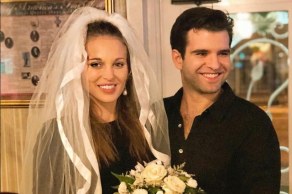 She posted this at the time of their wedding:

“Unconventional, yet unconditional. Married to my best friend. My soulmate. The person who never turned his back on me and vice versa. We have one life. Free yourself! P.S. We have never had sex. It’s pure friendship.”

Society has embraced same-sex marriages, so why not this? And if two best friends can get married, why can’t that guy down the street marry man’s best friend: his German shepherd?

How accepting have we gotten of such a broad definition of marriage? The only reason this wedding got any news coverage is because one of the many socialites at this wedding happened to be the president’s daughter. Tiffany Trump was the flower girl.

What captured my attention in Brown’s post about her wedding is the two-word exclamation: Free yourself! She’s telling us to stop placing ourselves in anyone’s mold or standard but our own. Marriage is whatever you want it to be.

When marriage can be anything, marriage means nothing.

I’m curious what’s going to happen to this best-friend legal arrangement when one or both of them actually fall in love with someone else. My mind runs in all sorts of directions, and none of them are good.

Those outside the Christian faith lambaste believers for their adherence to the idea of marriage as a life-long commitment between one man and one woman. After all, we’ve seen a lot of failed marriages, a lot of abusive marriages, and a lot of 2nd and 3rd marriages—even among believers.

“A man leaves his father and mother and is united to his wife, and they become one flesh” (Gen. 2:24).

post supports the study “When Marriage is Questioned” in Bible Studies for Life.

3 thoughts on “Yet Another Stab at Redefining Marriage”