There’s nothing sweeter than a really nice hotel when you’re traveling. It doesn’t have to be swank or expensive, but I do want to be treated well. I have a favorite chain I use almost exclusively. It’s reasonably priced, and I can always count on a good bed, a bottle of water at check-in, and all the coffee I can consume.

That’s not enough for some people. Some people want to be treated like royalty, and some hotels will gladly pull out all the stops on hospitality to accommodate them. Of course, it comes at a price.

Rooms at the Burj Al Arab Hotel in Dubai range from $2,000 to $12,000 a night. It is probably the most expensive hotel overall, but hey, why not? The rooms are insanely huge. But if you actually want to leave this palace of luxury, they will personally take you places in a Rolls-Royce. You will also have a personalized butler. (Do the 360 tour on their website.)

If that level of hospitality still sounds like a bad night at a Motel 6 for you, the Hotel President Wilson in Geneva, Switzerland has the Royal Penthouse Suite you can stay in for $68,000. A night. Sure, the room has a private elevator so you don’t have to mingle with the riff-raff, and it offers a panoramic view of Lake Geneva, but the selling point for me is the Steinway Grand Piano in the room. I can’t tell you how many times I’ve woken up in the middle of the night in a hotel and felt the urge to bang out some hymns or old Broadway show tunes (depending on my mood).

Back to reality, I produced a video several years ago related to Experiencing God for students. Our crew of twelve stayed in the same hotel for a week that was $18.00 a night. Eighteen whole dollars! The person arranging our travel set this up to save money, but—hey!—a continental breakfast was included. 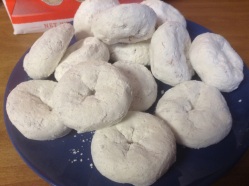 On the first morning, we entered the lobby and I had to ask where the continental breakfast was served. The desk clerk reached under the counter and pulled out those little packages of powdered doughnuts and a gallon of orange juice.

My room was threadbare. I think the carpet was installed during the Roosevelt Administration (the first Roosevelt). It was sad, but I perked up when two of the crew members stopped by my room. They exclaimed, “Wow! You’ve got a nice room.”

The church does not need to rival a five-star hotel with every amenity and personal service known, but neither does the church need to act like it couldn’t care less if a guest was there.

Which church would you rather visit?

What captures my attention are not any amenities (although it doesn’t hurt to serve good coffee). I’m captured by an attitude of hospitality. It’s the things we say and do that communicate a spirit of open arms. Good to see you … Tell me about yourself … Would you like some good coffee? … I’ve got a friend over here who’d love to meet you.

“Offer hospitality to one another without grumbling” (1 Pet. 4:9).

Why not try it this week with a guest —or even someone in the church you don’t know well?  Get to know the person without ever looking for the opening to talk about yourself. That’s a spirit of hospitality that goes far beyond powdered doughnuts or personalized butlers.