Blamed anybody lately for some woe in your life? If you have, you’re not alone. The Blame Game is one of our most popular pastimes, right up there with March Madness and ignoring telemarketers.

And that brings me to the Plaque. (The blame game, not telemarketers, although some days telemarketers feel like a plague.) 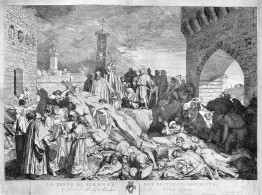 You’re probably familiar with the basic facts about the Plague. Also called the Black Death, the Plaque ran rampant through Europe for five years. Around 20 million people died—1/3 of Europe. I’ll spare you the details of what happened to a person with the plague, but let’s just say it was excessively nasty and gross. It was painful. Sometimes it was quick—some people went to bed healthy and were dead by morning—and others suffered.

The plaque hit Europe in October 1347. Twelve ships arrived in a Sicilian port, and all the sailors were either dead or close to it. Something was obviously wrong, so the Sicilian authorities immediately sent the ships away—but it was too late. The plague was already loose in the town and spread quickly through Europe.

We know now what caused the plague. It wasn’t the rats that stowed away on the ships and then scampered ashore; it was the fleas on the rats. Gas station restrooms are cleaner than medieval Europe, so the rats and fleas ran rampant.

So what does this have to do with blame? Even the most learned people in the 14th century were clueless about the Black Death, so to explain it they were compelled to lay the guilt somewhere.

If you ask me, sometimes bad things just happen because the world is a broken place. The entrance of sin brought about a fallen humanity and a fallen world where nasty things can happen—like disease-carrying fleas hitching rides on rats.

Speaking of disease-carrying fleas hitching rides on rats, let’s talk about government. (Just kidding. Sort of.) Our country is in a mess.

1. Admit your part in the problem. Let’s drop the self-righteous act of blaming everybody but ourselves. Really don’t think you have any culpability in the matter? OK, fine, but don’t come at the issue with  a sanctimonious “If you followed my example, you wouldn’t be in this mess” attitude.

2. Do what you can to fix the problem. (Playing the Blame Game does not count as doing something.)

It is far better to light the candle than to curse the darkness. —W. L. Watkinson

Our failure to be proactive and do something positive only contributes to the problem. We have become modern-day Pharisees.

“Woe to you, teachers of the law and Pharisees, you hypocrites! You give a tenth of your spices—mint, dill and cumin. But you have neglected the more important matters of the law—justice, mercy and faithfulness. You should have practiced the latter, without neglecting the former” (Matt. 23:23).

Step in. Do what you can—and do it with grace and humility.

“All of you, clothe yourselves with humility toward one another, because, ‘God opposes the proud but shows favor to the humble'” (1 Pet. 5:5).

God will hold me accountable if I fail to do anything but blame others.

And in that moment, I have no one to blame but myself.