It sounds like a cliché, but your voice does make a difference. 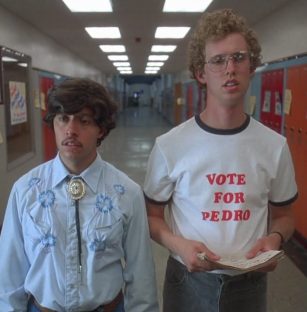 I don’t like to brag, but I was elected to office when I was young. I was going to be a real mover-and-shaker because, as a freshman, I was elected to the student council. It made me feel good that my peeps (or whatever we called each other back in 1972) wanted humble me to represent them.

A few days later, I happened to be in one of the high school work rooms. Left in plain sight were the tabulations from the historic student council vote. My ego took a hit when I saw how few people voted for me—and how few people voted at all. No one really cared who represented them, and of the small number of votes, I only had two more than my opponent.

I could’ve been depressed at the low number of votes; instead, I was happy that just two votes occasionally got me out of class in order to hang out in the cafeteria for student council meetings.

We face greater stakes than the opportunity to skip Algebra I. And our voice counts all the more.

You’re familiar with the women’s suffrage movement and the drive that gave women the right to vote in 1920. The House and Senate passed the amendment in 1919, but it had to be approved by 2/3 of the states. That meant of the 48 states, 36 had to vote in favor. When it came Tennessee’s turn to consider the amendment, 35 states had ratified it. All Tennessee had to do was say yes, and women could vote.

But the state legislators were tied at 48-48.

So one mother took it upon herself to speak up. Her son, Harry T. Burn, was barely an adult. He was only 23, but he was a representative and he had a vote. He was also opposed to giving women like his mother the vote, but dear ol’ mom wrote him a letter. She reportedly told him to “be a good boy.” Burn changed his vote and the amendment was ratified. This past week (August 18, 1920) marks the date one letter and one vote made a difference.

We often see injustices as societal problems that are bigger than we are. We can—and should—speak up, though, and work through politics and the community to change things.

But to the person living under those injustices, they are not societal problems. They are his problems. It is personal—very personal. At this point, your single, solitary voice can truly make a difference. Show them the love of Christ. Jesus said,

“I was hungry and you gave me something to eat, I was thirsty and you gave me something to drink, I was a stranger and you invited me in,  I needed clothes and you clothed me, I was sick and you looked after me, I was in prison and you came to visit me…. Truly I tell you, whatever you did for one of the least of these brothers and sisters of mine, you did for me” (Matt. 25:35-36,40).