If Jesus had first launched His ministry in America in 2017, I wonder where He’d go.

If you’re a regular reader of books (and I hope you are), there’s one part of a book I’ll venture you rarely pay attention to: the margins. Every book and magazine has margins, but we never notice them. (The graphic designers I work with at LifeWay are the exception. Margins are a big deal to them. But I digress.) 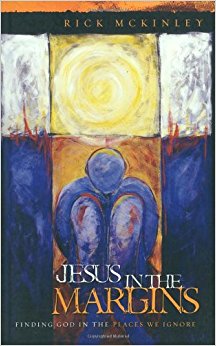 In his book, Jesus in the Margins. Rick McKinley, pastor of Imago Dei Community in Portland, Oregon, wrote that society has margins just like a book.  Unlike the blank margins in a book, though, society’s margins are full of people.

“Society—our world, our culture—has margins just like this book does. They’re places occupied by people who go unnoticed, misfits who seldom figure in when the mainline world defines and esteems itself.  But they’re there.”  —Rick McKinley, Jesus in the Margins

We don’t notice them, but they’re there. People in the margins. Even our secular culture recognizes this and has a name for them: marginalized. People pushed to the periphery.

So if Jesus launched His ministry in America in 2017, where would He go? He’d hang out among the people in the margins. After all, those are the kind of people He spent time with in the first century. Tax collectors. Sinners. Those who didn’t fit normal society.

You probably assume I’m going to turn this blog into a call to start a ministry to the marginalized in society. And why not? Our society has a lot of “misfits”—those who may look out of place in our white-bread suburban evangelical churches—and they need Jesus. Yes, that would be a good thing to do, but …

Reach out to the marginalized in your church.

They’re there. You just don’t notice them. After all, they’re in the margins.

Society is full of marginalized people—and so is the church. These are people who love Jesus like you do, but they’re on the fringes: socially awkward, uncomfortable to be around, living in a tough situation, and not quite fitting the niche of your church group.  They’re in the margins—right where Jesus is.

And that’s where we should be too.

In teaching about His return, Jesus spoke of separating the people as a shepherd would separate sheep from goats. He told this about the sheep:

“Come, you who are blessed by my Father; take your inheritance, the kingdom prepared for you since the creation of the world. For I was hungry and you gave me something to eat, I was thirsty and you gave me something to drink, I was a stranger and you invited me in, I needed clothes and you clothed me, I was sick and you looked after me, I was in prison and you came to visit me” (Matt. 25:34-36).

The sheep responded with surprise. They did not realize that, as they cared for these marginalize people, they were ministering to the King. The King replied, “Truly I tell you, whatever you did for one of the least of these brothers and sisters of mine, you did for me” (v. 40).

The marginalized include our brothers and sisters in Christ. Next time you’re gathered at church, look around. They’re sitting with you. They may even be in your Bible study group. But don’t just notice them. Talk to them. Build a relationship with them. Love them. Support them. Encourage them.

“Truly I tell you, whatever you did for one of the least of these brothers and sisters of mine, you did for me” (v. 40).

post supports the study “Life in the Community” in Bible Studies for Life.

6 thoughts on “They’re Sitting Right Next to You”