I am an editor and a writer. That means two things: 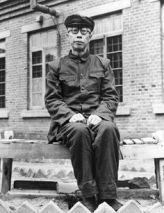 But I fare much better than Henry Puyi. In the 1960s, Puyi was an editor in Communist China, earning the equivalent of 40 dollars a month—and that was a step up from his days in a repair shop.

But it was a far cry from his earlier role: emperor of China.

In 1908, when Puyi was just two years old, he became the emperor of the Qing dynasty. Pretty hefty role for a child still dealing with potty training. Yet he was not allowed to behave like a child; he was treated like an adult. And those adults were cold and distant to him. Grown men would kowtow—bend down with their heads to the ground—and never look directly at him.

The life awaiting Puyi was a life of extravagance.

The Forbidden City is ginormous. I once spent a full day there and was worn out from so much walking. But that was never a problem for the emperor. He never walked. He was transported everywhere.

And who did all this transporting? Eunuchs. Lots of eunuchs. At one point during the Ming dynasty, an estimated 70,000 eunuchs did everything for the emperor.

Well, not everything. The emperor also had concubines. Lots of concubines—which explains why all the men who served the emperor were eunuchs.

All this awaited Puyi as the supreme ruler of China (and the physical world), but it never happened. The Chinese Revolution broke out in 1911, which overthrow the imperial dynasty. This week marks the date (February 12, 1912) when Puyi, at the ripe age of six, was forced to abdicate his throne.

Puyi was allowed to stay in a portion of the Forbidden City, but his power had been stripped. Two thousand years of imperial rule were over. Over the next few decades, Puyi was given different roles in the Chinese government and during the Japanese rule, but nothing of significance. And then when the Communists took over in 1949, it was all down hill from there. [I have seriously shortened the account of this once-great-man’s life. My apologies. Read more about him.  Or watch the well-done 1987 movie The Last Emperor.]

Another king gave up His throne. He did not abdicate; He gave it up willingly. Jesus Christ gave up the glory of His throne to become like us. Henry Puyi ultimately became like the common people, but he could do nothing to ease their suffering. Christ, on the other hand, took our suffering upon Himself. He removed our sin. Heaven—once a forbidden city to us because of our sin—was now opened to us. We can enter the glories of heaven because the Glory of Heaven came to us.

“Christ Jesus: Who, being in very nature God, did not consider equality with God something to be used to his own advantage; rather, he made himself nothing by taking the very nature of a servant, being made in human likeness.  And being found in appearance as a man, he humbled himself by becoming obedient to death—even death on a cross!” (Phil. 2:5-8).

Henry Puyi never returned to the throne he was once destined for. But Jesus returned to His throne to reign as Lord.

“Therefore God exalted him to the highest place and gave him the name that is above every name, that at the name of Jesus every knee should bow, in heaven and on earth and under the earth, and every tongue acknowledge that Jesus Christ is Lord, to the glory of God the Father” (vv. 9-11).

When I visited the Forbidden City, I found it incredibly fascinating, yet it holds no comparison to the glories of God’s heaven that awaits me. And heaven’s King is still on His throne.