I know someone’s going to call me un-American … 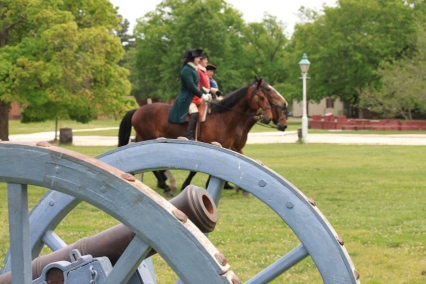 Earlier this week, my wife and I spent a few days in Colonial Williamsburg. A great experience, especially for history nerds like my wife and me. It was a great time to go, too, because of great weather and few people. We had several “private” tours—just the two of us with the colonial spokesperson.

One afternoon, we sat in the Capitol with a few others as we participated in a vote on independence. Patrick Henry and others spoke, and at the end we were called on as the delegates to vote yea or nay on declaring Virginia’s independence. [This was the Virginia Resolution, signed this week, May 15, 1776.]

I love America, and I believe God has been good to us. But all during the reenactment and impassioned speeches for independence, a single passage kept playing in my head:

“Let everyone be subject to the governing authorities, for there is no authority except that which God has established. The authorities that exist have been established by God. Consequently, whoever rebels against the authority is rebelling against what God has instituted, and those who do so will bring judgment on themselves” (Rom. 13:1-2).

I tried to see this through the eyes of a British citizen in the colonies, and I couldn’t think of a single issue the British crown was calling the citizens to do that was against biblical teaching. In other words, King George III was dictating nothing that would require me to go against Scripture. Nothing.

But the rights of the colonists were being tromped on. They faced severe taxation without representation.  We are so “Americanized” with our emphasis on rights—which often bleeds into entitlements—that we think anytime a single right is restricted, we’re being persecuted. Yet when Paul wrote the Book of Romans, our notion of civil rights and representation was non-existent for most of the Roman Empire. Paul himself knew hardship and persecution, yet he could still write, “Let everyone be subject to the governing authorities …”

The whole experience at Colonial Williamsburg created a tension for me:

I love this country … but 240 years ago, I would’ve been a loyalist.

These thoughts move beyond reenacting history and have great implications for today. Depending on who you talk to, one or more of the presidential candidates is going to lead this country into ruin.  How willing are we to follow the principle of Romans 13 even when the elections or laws don’t go the way we want them to go?

I love this country—and I will work to make this a better country—but I will not lose sight of where I truly belong: “But our citizenship is in heaven. And we eagerly await a Savior from there, the Lord Jesus Christ” (Phil 3:20). That’s my greater loyalty.

One thought on “I Would Have Voted Nay”