No one would dispute the value of peace with each other—a world where we may not be exchanging Valentine’s Day cards, but at least we’re not bombing each other. But that’s a limited view of peace.  In fact …

We can’t have peace with each other until we have peace within ourselves.  Now we’re getting to the kind of peace Jesus was talking about when He said, “Peace I leave with you; my peace I give you. I do not give to you as the world gives. Do not let your hearts be troubled and do not be afraid” (John 14:27).

The Hebrew idea behind peace is so much broader than ours. Peace, or shalom as they would say, refers to completeness, wholeness, well-being, and even  health. When you experience shalom, you are at ease and comfortable with … well, everything.

When Jesus told His disciples He would leave them with peace, they understood this Jewish idea of peace. Their hearts would not be troubled because they were experiencing this sense of well-being—even if the world around them was not at peace.

That’s an inviting idea, isn’t it? So how do I get me some of this shalom-peace? 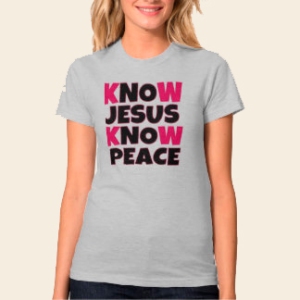 In his short letter James wrote that we have desires battling inside us (not a very peaceful image), and those desires are rooted in pleasing ourselves.

“What causes fights and quarrels among you? Don’t they come from your desires that battle within you? You desire but do not have, so you kill. You covet but you cannot get what you want, so you quarrel and fight. You do not have because you do not ask God. When you ask, you do not receive, because you ask with wrong motives, that you may spend what you get on your pleasures” (Jas. 4:1-3).

We focus on ourselves—which is nothing less than sin—and we miss out on the greater things God has for us. Like peace.

James also pointed us to the solution just a few verses later: submit to God (v. 7) When we surrender our lives to Jesus Christ, we come to One who knows a few things about peace.

After all, He is the Prince of Peace. 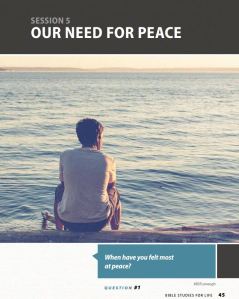 post supports the study “Our Need for Peace” in Bible Studies for Life.