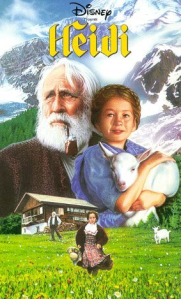 If we made a list of movies that are universal favorites, I’m sure Heidi would make the list.

You know, Heidi, the much-loved, much-watched TV version from 1968?

I just assumed everyone loved this move, since so many people watched it when it premiered. Even rough-and-tumble, couch-potato, let’s-watch-football-all-day manly men watched it.

On November 17, 1968 the Oakland Raiders and the New York Jets were both playing a strong game. They were both top-rated teams, and the game proved it. However, the game ran long, and at the top of the hour, NBC replaced the game with the made-for-TV movie Heidi—even though there were only 65 seconds left in the game!

NBC expected high ratings for the children’s movie, but what they received instead were high rantings from football fans.

What makes the decision even worse was those 65 seconds were the best moments in the game. The Raiders scored two touchdowns within nine seconds. A record number of people missed a great event because a decision was made to stick to the schedule.

Schedules are important. I’m rather married to my to-do list and calendar. But sometimes I’ve got to set aside my schedule for something unplanned. And more important.

As the cartoonist Allen Saunders said, “Life is what happens to us while we are making other plans.”  (Sorry, Lennon fans. Saunders said it first, in 1957.)

Jesus had the same approach about interruptions. Even as He was on His way to raise a young girl back to life—a pretty important task in my opinion—He let a woman interrupt His schedule.  His ministry was full of these interruptions.

“Be very careful, then, how you live—not as unwise but as wise,  making the most of every opportunity, because the days are evil” (Eph. 5:15-16).

I still maintain a calendar and a to-do list. And I have days where I fly through my schedule. And then I have other days—full of unexpected tasks and interruptions. Those are just as important.

I’d hate to miss a great life moment because it was not on my to-do list.

And watching Heidi is not on my to-do list.