In 1776, a British officer entered the camp of the Continental Army under a flag of truce. His mission: to inform General George Washington that Captain Nathan Hale had been captured, confessed to being a spy, and was hung that very morning. The officer, Captain John Montresor, said the British officers were impressed with Hale’s dignity and calm. And he delivered Hale’s famous last words spoken moments before he was hung:

“I only regret that I have but one life to lose for my country.”

Earlier in the summer, the British army had made its move toward New York. First taking Staten Island and then Long Island, the British forced the Continental Army to retreat into Manhattan and finally out of New York altogether. New York was strategic to the British success, and Washington desperately needed information … and this brings us to September 10. 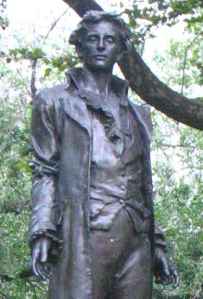 On this day, General Washington called for a volunteer for a dangerous mission: to go into enemy-held territory and gather information. He needed a spy—and Nathan Hale volunteered. He was only 21.

I don’t make my choice to live for Christ in the heat of the battle, when temptation is strong, or my faith is challenged; I make that decision before I ever leave the house.  Jesus told us to count the cost of following Him.

“Suppose a king is about to go to war against another king. Won’t he first sit down and consider whether he is able with ten thousand men to oppose the one coming against him with twenty thousand?” (Luke 14:31).

Jesus spoke these words in the context of calling for wholehearted death-to-self commitment. “Whoever does not carry their cross and follow me cannot be my disciple” (v. 27).

Count the cost.
Die to self.
Step forward.
Take the risk.

A commitment to follow Christ will differ in one respect from the words of Nathan Hale.  By dying  to self, you don’t lose your life. You gain it.