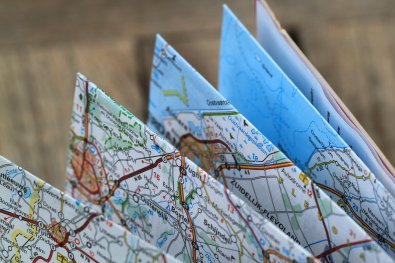 I used to love road maps. I even knew how to fold them. As a kid, I never minded the long road trips. I had a book to read, two sisters to pester, and the road map. I don’t remember ever asking, “How much longer?” but I would ask, “Can I look at the map?” I enjoyed following our route on the map.

Years later, I’d study the map prior to trips. I mean study it. A few years ago, my oldest son said, “It amazed me as a kid how we’d take these long trips, and it’s like you just knew where to go.” The map was my textbook, yet even as we were on the road, we would keep the map handy for reference.

And then came GPS. Some might say the GPS has made me lazy; I prefer to sound more spiritual and say it made me trusting.

I didn’t trust GPS at first. Prior to the GPS phone app, I had a certain name-brand unit that set on the dashboard. It was OK—except in Atlanta. Perhaps the programmer didn’t like the Atlanta Braves or preferred Pepsi over Coke, but every destination I requested in a 40-mile radius around Atlanta was given with the longest route possible. It gave me trust issues.

Those trust issues carried over to the phone app. I occasionally got into arguments with my phone’s GPS. I argued with a phone. But over time, I learned that, hey, the route she took me on really was better. My modus operandi these days is to let my wife serve as the navigator. I’d rather hear her voice anyway. (I also nixed the British voice of Siri on my iPhone because I kept wanting to drive on the wrong side of the road.) My wife sets the destination in the phone, reads the GPS map, and gives me the play-by-play instructions. I’ve learned to trust her directions. The worst I’ve done in recent months is the occasional, “Well …. O … K …” with a tone of cynicism, but I still turn where GPS tells her to tell me to turn.

On more than one occasion, my unerring male sense of direction says to go west, but GPS/wife tells me to go east. I’ve learned to squelch my feeling and turn east. And I get there every time—on time and with my marriage intact.

I’ve learned to trust my wife because she is obediently following the GPS—and GPS sees the big picture. I just see the road in front of me. GPS sees my destination long before I do.

GPS has reminded me to trust God for the same reason. He sees the big picture. I know where I want to go, but He knows where I need to go. He knows what roadblock or congestion lies ahead. When I obediently follow Him, I arrive at the destination every time.

To the Old Testament prophet Elijah, it made no sense to take the route into the region of Phoenicia.  This was the home base of Queen Jezebel—the one who was threatening his life—and a big center for Baal worship—the pagan religion he had been publicly preaching against. But Elijah trusted God, the One who sees the big picture. Elijah’s time in the village of Zarephath was used greatly by God for His purposes.

This is how GPS has taught me to trust God more fully.

God does this to a far greater degree.

Every time I trust God, I arrive at a better place in my life than I expected. And that only makes me trust Him more.

This post supports the study “Serve with Trust” in Bible Studies for Life and YOU.

4 thoughts on “Learning to Trust God”