You probably recognize this drawing of praying hands. I saw this image every time I visited my grandparents. I’ve seen it rendered as a sculpture. You’ve seen it too, but do you know the story behind it? The story of how this drawing came together is beautiful and inspiring.

Too bad it’s not true.

Albrecht Dürer (born 1471) grew up near Nuremberg, Germany. He and one of his brothers both wanted to be artists, but their parents could not afford art training. So the brothers devised a plan. With the flip of a coin, one brother would work in the nearby mines and earn money so the other brother could attend art school. After four years of training, the brother would return and pay for the other brother to attend art school, using money from his paintings.

Albrecht won the coin toss. By the time he graduated from art school, he was already earning huge fees for his commissioned artwork. When Albrecht returned home, he was prepared to send his brother away for art training. But there was a problem. After four years in the mines, the brother’s hands were worn and crippled; he could no longer hold a brush for the delicate work of painting.

The brother was not resentful, In fact, he was glad for Albrecht’s success and he would pray regularly for his brother’s continued success. When Albrecht saw this, he decided to honor his unselfish brother by painting his hands in prayer.

Since the sketch was finished in 1508, it has become the best-known drawing of its kind in the world—and a beautiful reminder of loving sacrifice.

As we wipe the tears from our eyes, let me remind you: this is a myth. We don’t know who originated the story, but it was copyrighted by J. Greenwald in 1933! (You can read his version here.) Against the myth are these truths:

Nevertheless, the fable persists. Preachers and writers have used this story to talk of loving sacrifice … the idea that no one succeeds apart from the help of others … sacrificial giving and praying for others. But no one bothers to check to see if the story is true or not. And after all, does it matter if it’s true since it gives us such an inspiring message? 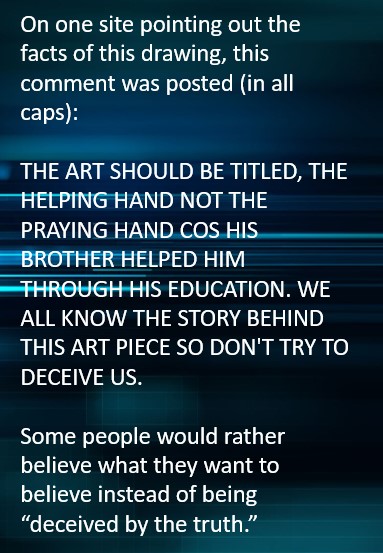 It matters to me. The longer a myth persists, the more it is accepted as the truth. You may think I’m making too much of a “harmless, but inspiring” story, but the way this false story has become accepted as true points to a greater danger we face every day:

The abundance of fake news we read and share every day.

We all bemoan the presence of fake news, but we share it anyway! Why? Our unspoken rationale is: What I am sharing is not fake news.

How do you know what you’re sharing is not fake news? We never take the time to see if what we’re believing and spreading is legitimate. So while we complain of how “the other side” (the Republicans, the Democrats, the COVID-19 conspiracists, or whoever) is dividing the country with their fake news, we are contributing to the problem.

Yes, Christian, I am talking to you. Check your new source. Check it twice. If you’re trying to convince someone of the rightness of your beliefs, but they see you are supporting your view with bogus facts, why should they believe you when you start talking about Jesus?. Maybe all your talk about Jesus is bogus too.

If that wasn’t blunt enough, let me try again. Your political rants based on distorted or outright false news makes you look really bad as a Christian. And that reflects on the rest of us. More importantly, that reflects on Jesus.

Yeah, I take truth seriously. And you should too.

2 thoughts on “The Hidden Danger of Fake News”